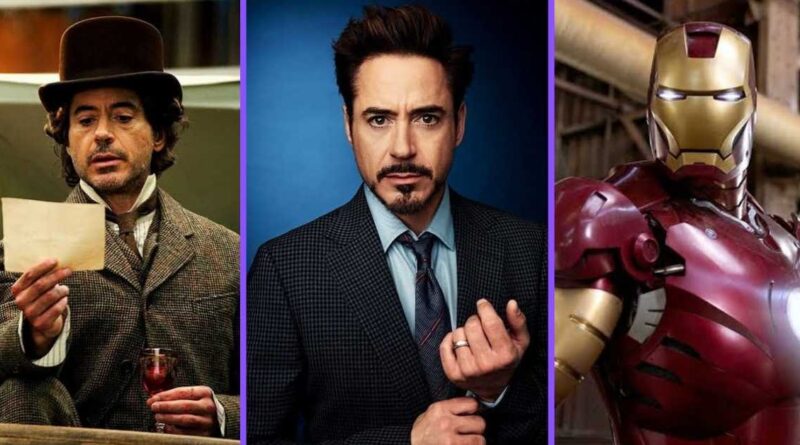 An amazing future lies for him as Sherlock Holmes.An American actor and producer, Robert Downey Jr., has gone through some serious ups and downs in his life. At a young age, his life went through a period of drug abuse and legal problems, even though the world is praising his work in the Marvel Cinematic Universe.

Robert Downey Jr. entered the MCU in the year 2008, playing the role of Tony Stark, aka Iron Man, which was the first film of MCU. In the following years, the role of Robert Downey Jr became popularly known, and he mentored Peter Parker (Tom Holland) too in Spider-Man: Homecoming premiere. Robert Downey Jr. had two Tony Stark leading sequels of Iron Man 2 & 3 and, along with that, worked in many Avengers crossovers.

Avengers: Endgame film (2019) includes the last of Tony Stark, as he died trying to save Earth from the hands of Thanos. In the following part of Spider-Man: Far From Home, featuring Tom Holland as Peter Parker, Tony Stark has made arrangements for him, too, by giving him access to his whole security system. However, Robert’s journey in the MCU has come to an end, and his work is rolling again through the series of Sherlock Holmes.

The foundation of the Marvel Cinematic Universe started with the film Iron Man in the year 2008, featuring Robert Downey Jr. as the leading cast. This role turned his life upside down as his performance was praised because of his comeback. The struggles Robert went through in his life and then his acting in the role of Tony Stark is a big salute.

Tony Stark, aka Iron Man, is another name Robert Downy Jr. is being remembered by the world, as this role became his signature role. From 2008 till 2019, 11 years of Tony Stark made Robert Downey Jr. invisible and took his career to the next level. Because of this, Robert was rarely seen in non-Marvel movies. However, the two parts of Sherlock Holmes can make their comeback by not being Tony Stark.

During Robert’s MCU roles, apart from Tony Stark, one of the biggest hits of his performance was seen in Sherlock Holmes movies. The first part of the Sherlock Holmes franchise was released on Christmas Day in the year 2009, which got highly positive reviews and more than $524 million around the world.

The second part, Sherlock Holmes: A Game of Shadows, performed even better, as it got $545 million, which was released around the holiday season in 2011. Both of Robert Downey Jr.’s roles, Sherlock Holmes and Tony Stark, were recognized equally, and the Sherlock Holmes series gave him a chance to work outside the line of superheroes.

The next part of this franchise, Sherlock Holmes 3, has been talked about since 2011 when news came that Guy Ritchie would be directing it. With the character of Robert Downey Jr. and Tony Stark ending in Avengers: Endgame, the Sherlock Holmes one will take over and could be the future of his career.

With the end of Tony Stark, aka Iron Man, in the year 2019, Robert Downey Jr. recently realized about the new projects in which he could work, which got delayed because of the inevitable global pandemic. Robert’s first premier after Iron Man, Dolittle, released in the year 2020, was a big failure.

Robert Downey Jr.’s biggest moment on screen is still the heroic defeat of Thanos in Avengers: Endgame. There’s not a lot to think about Robert Downey Jr.’s future, as after Iron Man, it’s like a blank canvas, which could be filled with the adventures of Sherlock Holmes, a big hit in its time.

According to the news, it is still being heard that Guy Ritchie, the director, and Robert Downey Jr., the producer, might be reprising the role of Sherlock Holmes, and Robert can enter the franchise with a cameo or something. The end of a long commitment of Iron Man in Robert Downey Jr.’s life is opening up a wide array of different projects.