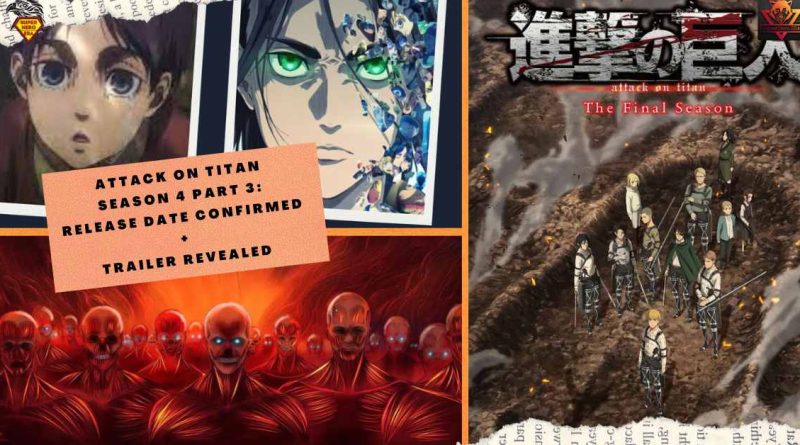 Few shonen animes evoke the same emotion as Attack on Titan, and with the ongoing final season, these emotions are only amplified.

Since its debut in 2013, Attack on Titans has gone on to become one of the most popular shonen anime series of all time, and fast forward ten years, and the feeling remains the same.

Just like any other year, fans begin to expect new Attack on Titan content, and 2023 is no different as the long-awaited Attack On Titan Season 4 Part 3 has been officially announced.

So, Survey Corps, pick up your 3D gear and sharpen your blades as we bring you all the latest news and updates on Attack On Titan Season 4 Part 3.

WHAT IS THE ATTACK ON TITAN SEASON 4 PART 3 RELEASE DATE?

On 3rd April 2022, an update was shared, which stated the conclusion of season four, part two, and confirmed that a third part was on its way.

Following the announcement, Attack On Titan Season 4 Part 3 trailer was also released; check out below:

This update was received with mixed reception within the fandom as its been well-known and documented on the numerous production issues faced by studio MAPPA.

Studio MAPPA is one of the biggest production studios responsible for some of the biggest anime series, such as One Punch Man, Jujutsu Kaisen, Chainsaw Man, and Vinland Saga.

They took over from Wit Studios in 2021, who themselves were facing cost issues due to the size of the project.

Although MAPPA has done a brilliant job in animation and storytelling, the production issue continues to be a nightmare for the studio.

In addition to production issues, MAPPA is also riddled with production schedule delays since they have already got so much on the plate in the form of Vinland Saga Season 2, Jujutsu Kaisen Season 2, Campfire Cooking in Another World With My Absurd Skill, and Zombie Land Saga The Movie.

But with that being said, MAPPA has invested much of its resources and time into making the final season a success with high-standard animation quality with jaw-dropping fight scenes.

The Attack On Titan Season 4 Part 2, or Attack on Titan Episode 87, titled “The Dawn of Humanity,” opens up with a bird flying overhead which directly relates to Mikasa s’ narration.

In this narration, she comments on how people seem to think Eren has changed, but he may have been the same person ever since the beginning.

The reason this relates to the bird is that in Eren s’ mind, the walls were nothing more than a birdcage that took his freedom away, which is why he hated the Titans even before his mother was eaten.

Years later, when he finally escaped the bird cage and ventured outside, he realized that he still wasn’t free since their enemies across the sea were just another bird cage restricting his freedom.

Once again, therefore, by doing the rumbling, this is his one chance to become truly free.

After arriving on the Marely shoreline, the group witnesses hostile treatment towards Ymir s’ subjects as a thief called Ramzi is rescued from the mob.

Eren escapes the sights to Ramzi s’ home but is followed by Mikasa, who is questioned on her loyalty to him. Mikasa, albeit surprised by the question, calls him family.

The following day, the protection group announces that Devils from the Paradis will be exterminated, which is greeted by a roar from the audience.

We get a short flashback wherein Eren meets Yelena and decides to follow the euthanasia plan letting Floch and Historia know of his true intentions.

Zeke informs Eren that the Ackermans are not obliged to protect the host, and Mikasa sticks up for him because she loves him. Eren replies by stating how she wants her friend to live a long and healthy life.

The episode ends with Eren and the rumbling, reaching Marely as the Global alliance s’ navy is destroyed as the Colossal Titan enters the fray.

Attack on Titans season four is directed by Yuichiro Hayashi and scripted by Hiroshi Seko. Characters are designed by Tomohiro Kishi, while the music is composed by Hiroyuki Sawano and Kohta Yamamoto.

Yusuke Tanawa is the CGI producer with Jun Shishido is the chief episode director. Kazuo Ogura directs Art, and animation is developed by Studio MAPPA.

You can find the list of Attack On Titan Season 4 Part 3 characters and voice cast below:

Despite the fact that the multiple parts Attack on Titans has been produced, it remains one of the highly anticipated shonen animes of the year. 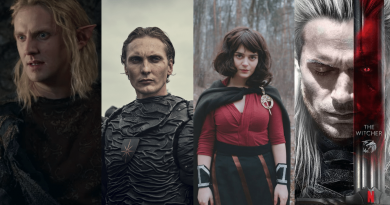