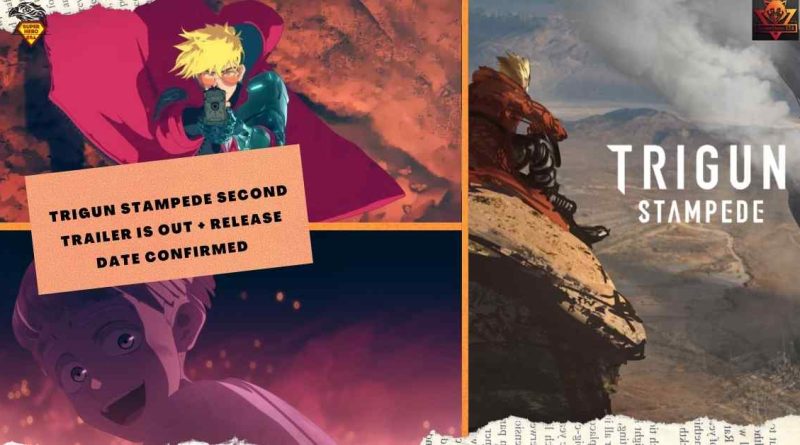 Western Space Fantasy was a massively popular genre in the 80s and 90s with its unique theme, characters, and plotlines. The space adventures were an instant draw to many viewers, with influences featuring robots, cowboys, and invaders.

When we speak of western space fantasy animes like Cowboy Bebop and Outlaw Stars, there is no doubt Trigun is also a gold standard in this genre.

Trigun is a space fantasy-action series based on the manga writings of Yasuhiro Nightow. The original series, which premiered in 1998, was incredibly popular and has gathered an increasing fanbase over time.

Despite the original series ending some 24 years ago, the hardcore western space fantasy fans still remember the classical 1998 Trigun fondly, and many of them still wish for its return.

Well, looks like their wishes have been answered in the form of a reboot titled Trigun Stampede. This is the first time the Trigun franchise will return to the big screen since Trigun: Badlands Rumble movie in 2010.

While the Trigun fans are delighted by its return however the announcement of Trigun Stampede was met with equal excitement and concerns from the fandom.

Either way, fans are looking forward to the new anime adaption of Trigun Stampede, which now has officially got a release date and trailer.

Are you a fan of the Trigun series? If so, keep scrolling to find out more about all the latest news and updates on Trigun Stampede.

WHAT IS THE TRIGUN STAMPEDE RELEASE DATE?

On 17th June 2022, the show’s official Twitter account announced the comeback of the Trigun series in the shape of a remake titled Trigun Stampede. The announcement tweet confirmed that Studio Orange would be involved in its 3D production.

A teaser trailer for Trigun Stampede was launched during the Anime Expo 2022 on 2nd July 2022.

The episode count for the Trigun Stampede is yet to be announced but considering its new reboot series; we can expect it to be multiple cours. Furthermore, Trigun Stampede Season 2 is also a possibility. Trigun Stampede has been officially licensed for a global release by Crunchyroll.

You can watch the Trigun Stampede PV trailer below: –

The Trigun manga series was written and illustrated by Yashuhiro Nightow. It began serialization in Shonen Monthly Captain Magazine in February 1995. Following a two-year hiatus, Trigun was republished under the name Trigun Maximum in Young King OURs magazine in 1997.

The first manga volume run of 30,000 sold out shortly after release. The second volume concluded the original series early the following year and became the top-earning graphic novel of 2004.

The manga has been collected into 14 volumes and 97 chapters, with the final issue released on 27th February 2008.

There is yet to be an official plot revealed. Still, according to writer Yasuhiro Nightow, the Trigun Stampede will not be a continuation of the original Trigun series, which took massive freedom from the original source material.

The only plot point which can be gathered through the trailer is the indication of Vash and Knives s’ origins in No man Land. In the trailer, we see Meryl Strfye dragging Vash as Roberto De Niro watches.

Vash looks younger, which indicates the story focuses on his childhood. Meryl and Millie are out of Wolfwood, but a younger version of him with the gung-ho guns could technically be included.

Although it wouldn’t factor into Vash’s story, he is left in a situation where the entire point of his character alerts the cost.

The whole arc of Vash’s development is to understand why it won’t be his tragedy in the original is like watching the happy-go-lucky front slip away to reveal the tortured soul underneath.

We see him purposefully suffer for the good of others while there’s a bounty on his head. He’s hunted at every turn despite his good deeds, and Wolfwood calling him out in their first meeting is heartbreaking.

The best starting point for Vash’s character is that of the generic protagonist, so he can then fall from there, knowing he has to take a different arc.

We can shift that starting point to something almost more tragic, like how did he start to fake such happiness in the first place and why did he feel it was necessary.

This is a man whose entire life with everyone he’s loved has just been torn apart and ripped away before his very eyes as he’s dropped to a harsh wasteland with no one but his psychotic brother.

Reboots and Remakes are always controversial topics in the anime fandom, especially if a series is being brought back two decades after its release.

Space western-Fantasy animes have always been developed with an old aesthetic appeal that most fans fondly remember and enjoy.So, it is no surprise that the new CGI-enhanced 3D look of the Trigun Stampede character designs didn’t go well with the fans.

CGI animation is again a very devise topic amidst the fandom where some prefer the modern approach while others would like to stick with the tried and tested.

If we deep dive into the trailer, we can see some significant changes in character designs as well. Nicholas D. Wolf has a younger look; instead of smoking a cigarette, he is sucking on a lollipop.

There is definite skepticism and discontent around the Trigun fans, but it would be unfair to dismiss the remake series completely based on the trailer. Every updated character design is a product of its time, as a simple look at it almost seems to fit with Vash’s personality.

There are a lot of background details that give hope, too, the town built onto the cliffside seems on point with the experience of hardly surviving wasteland.The clothes they wear seem similar to those in the original, while the blocky pistol screams 90s, and the guy holding it has that same adapted western feel.

Trigun stampede won’t be perfect, but neither was the original so let the creators take some risk and then change it a bit with the times.

Trigun Stampede will be directed by Kenji Mutou and scripted by Shin Okashima. Characters are designed by Akiko Sato, and the music is composed by Tatsuya Kato. Animation is developed by Studio Orange, which has produced shows like Beastars.

You can find the list of Trigun Stampede characters and voice cast below:

Agreeably, the trailer probably doesn’t capture or captivate the essence of Trigun, but for the sake of a classic 90s series s’ return, fans should give it a chance.