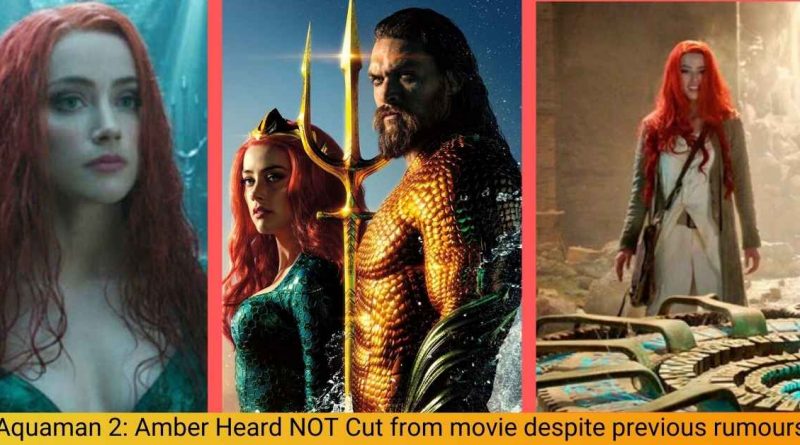 Despite multiple rumours about Warner Bros. planning to cut Amber Heard from Aquaman 2, she was recast as Mera for the upcoming movie.The legal battle between Aquaman actress Amber Heard and her ex-husband Johnny Depp ends with the jury siding in favour of the Pirates of the Caribbean Actor.

Recent reports say that Amber Heard is still a part of the upcoming DC movie. To know the whole story, keep reading.

All Sub-Contents hide
1 Is Amber Heard in Aquaman 2? Updates from sources-
2 The story of Amber Heard and Warner Bros.
2.1 Also Read: Amber Heard testifies to being ‘cut’ from Aquaman 2 during defamation trial
3 Captain Jack Sparrow (Depp) v/s Mera (Amber Heard)
3.1 Also Read: Johnny Depp WILL NOT return as Jack Sparrow, regardless of the public opinion
4 Conclusion

Is Amber Heard in Aquaman 2? Updates from sources-

According to ‘Just Jared,’ sources reports on- Aquaman and the Lost Kingdom say that Amber Heard will be seen in the film, although in a small role. As Jared continued to cite their source, Heard will be recast in the film. In a statement issued to TMZ, Heard’s spokesperson said, “The rumour mill continues as it has from Day One- inaccurate, insensitive, and slightly insane.

The next important report, Variety, debunked Just Jared’s report that Heard has been cut from the Aquaman franchise’s next film- Aquaman and the Lost Kingdom.

The story of Amber Heard and Warner Bros.

Warner Bros. might cut Amber Heard’s part from Aquaman and the Lost Kingdom and will recast Mera, although nothing has so far been made official. The DC Universe launched this franchise- Aquaman-in 2018. Jason Momoa starred in Aquaman as Arthur Curry, which happened right after ‘Justice League’ made the audience familiar with Aquaman and his world. In the process, Amber Heard was introduced as Mera. Amber Heard returned in Aquaman as the love interest Aquaman, starring opposite Momoa.

Amber Heard returns to the DCEU during film scenes of Aquaman 2, even though her prolonged legal battle had made her return doubtful.The reports of the decision to cut Amber Heard’s part from Aquaman 2 will effectively end her time in the DCEU after only a few appearances. Her debut into the DC universe was through Justice League, then Aquaman 1.

Amber Heard was also seen in some scenes from Zack Snyder’s Justice League. The role of Mera in Aquaman and the Lost Kingdom is already rumoured to be cut short because the makers of the movie were to focus on Aquaman and Ocean Master, played by Patrick Wilson instead.

Also Read: Amber Heard testifies to being ‘cut’ from Aquaman 2 during defamation trial

The Amber Heard and Johnny Depp Defamation suit ended recently. The jury came to a verdict and gave their judgment against Amber Heard. As part of the trial, questions were raised about how she got the role and what is her future in the DCEU.

The actress said that Warner Bros. did not want to bring her back for Aquaman 2, but she remained in the main cast as Mera after Jason Momoa and director James Wan argued in favour of her.

Amber Heard admitted not being sure if her ‘reduced’ part in the movie would even make the final cut. After the judgement was in favour of Johnny Depp, speculations and rumours started mounting like never before about Heard’s future in DC.

While she might appeal the results of the Defamation trial, for now, it looks like Warner Bros. And DC are wishing to recast Mera. The fans might want to see the Game of Thrones reunion of Jason Momoa and Emilia Clarke.

As the new memes and rumours came up every day, the chemistry concerns between Momoa and Heard were always an issue. The studio will have to make good choices and look for a Mera to make the love interest more believable.

Also Read: Johnny Depp WILL NOT return as Jack Sparrow, regardless of the public opinion

A report by Just Jared claims that Warner Bros. will surely cut Amber Heard’s role from Aquaman and the Lost Kingdom. The plan for the movie is to cut all scenes where we can see Amber Heard’s version of Mera and recast the role from the Aquaman franchise. No new actress has been cast for the role for now.

It can all be just another rumour, and the Makers of Aquaman can not clarify if Amber Heard is in the movie or not until an official trailer or teaser is released. Cutting her part and finding a recast for Mera came to light when the actress confirmed Warner Bros. released her from her contract, and DC head- Walter Hamada- confirmed they considered recasting before starting production. 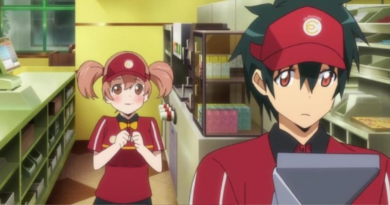 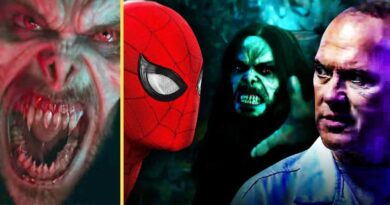 Morbius Trailer Freshes Our Memory Of Spider-Man and Venom