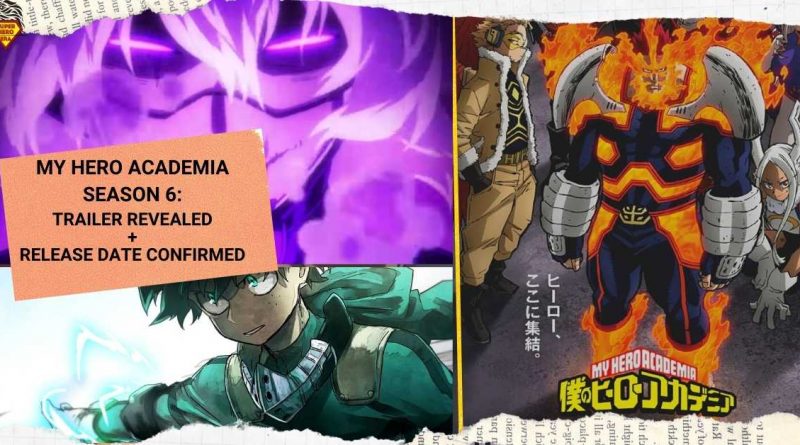 My Hero Academia Season 6 is finally here as the Heroes vs Villains war heats up.

There aren’t many anime in modern times that evoke as passionate emotions as My Hero Academia.

Written by Kohei Horikoshi and published by Shueisha, My Hero Academia is set in a world where Heroes are the protectors of humanity. Each Hero, just like in comics, has different powers called ‘Quirks.’ The Heroes are tasked to save civilians from the, you guessed it, Villains.

The plot follows the protagonist Izuku Midoriya who aspires to become a Hero despite being born without a Quirk. His idol is the strongest Hero, ‘All Might,’ who passes down his Quirk, ‘One for All,’ to Izuku, sensing his strong-willed determination to become a hero without a Quirk.

The rest of the story is about Izuku defending the world with his academy squad from evil and finding the answer to the question, “What makes a true Hero?”.

My Hero Academia is rated 7.9/10 and #6 in popularity on MyAnimeList.

WHAT IS THE OFFICIAL MY HERO ACADEMIA SEASON 6 RELEASE DATE?

On 19th June, the show’s official Twitter confirmed that the My Hero Academia Season 6 Release date is October 2022.

The official announcement also included the first look for My Hero Academia Season 6, which has, as of writing, crossed 121.k Likes and 57.2k RTs on Twitter, and on YouTube, the trailer has crossed more than 1.1 million views.

The new season also shot up the manga sales as Volume 33 of the manga recorded the most sold volume to now.

We expect more clips and images to be released for My Hero Academia Season 6 before the first episode premiers.

WHEN WILL MY HERO ACADEMIA SEASON 6 EPISODE 1 PREMIER?

Unfortunately, there was no official announcement in the trailer for the My Hero Academia Season 6 Episode 1 Release date.

But if you can’t wait till October 2022, you might want to visit the Hero Festival in Tokyo (Musashino Forest Sport Plaza), Japan, on 24th July 2022.

During the annual Hero festival, some lucky fans will be getting an early preview of My Hero Academia Season 6 Episode 1.

There will be guest appearances from fifteen-voice actors from the show who will interact and do stage readings as part of the live event.

Additionally, two new My Hero Academia season 5 OVAs are set to be released on 1st August 2022 worldwide called “Hero League Baseball” & “Laugh! As if you are in Hell”.

Like the past four seasons, My Hero Academia Season 6 will comprise 25 episodes as well.

There is no news or update on the Dub of My Hero Academia season 6 release date, which will soon be known when the original release version has a premiere date.

Usually, we get the English Dub within a month of the original air date. With that premise, we can expect My Hero Academia Season 6 release date dub between late November and early December.

You can find the English voice cast and character for My Hero Academia Season 6 below:

The Paranormal Liberation Arc will adapt chapters 253-306, making it the longest arc in the manga.

After seeing the trailer, the stand-out aspect for most fans has been the spectacular animation by Bones. All the characters look well detailed, especially the transitions of Endeavor and Dabi.

We also see the Rabbit Hero Mirko in the trailer, and we expect her to get more screen time in Season 6. Other heroes such as Deku, Bakugo and Hawks are also shown getting ready for battle.

My Hero Academia Villains such as Himiko, Re-Destro, and All for one will also be a big part of Season 6 as the trailer includes short montages of their upcoming battle.We do hope there are multiple fight sequences in one episodes as Season 5 cut out minor fight scenes and rushed the ending.

Finally, the trailer ends with what looks like a transformed form of Shigaraki as he will look to overpower One for All.

Despite some criticism of My Hero Academia Season 5 for being slow and rearranging chapters from the manga, the show fans are excited to see their Heroes back on screen.

My Hero Academia Season 6 is directed by Kenji Nagasaki and scripted by Yosuke Kuroda. Yoshihiko Umakoshi designs the characters, and the music is composed by Yuki Hayashi. The show was developed and produced by Studio Bones.

You can find the Japanese voice cast for My Hero Academia Season 6 below:

The series is entering its most exciting and action-packed season with the impending War between the Heroes and Villains to come; we sure can’t wait for My Hero Academia Season 6.

Top 5 Romantic TV shows for a mature audience to stream